Ansible is one of the most popular tools today in the Infrastructure Automation space. It is an IT orchestration engine that can be used for configuration management, orchestration, provisioning, and deployment. I really can’t compare ansible with other similar tools in the market today, because I haven’t used the other tools yet.

In this article we will be looking at how to install or upgrade NetWorker on Linux/Windows using. We are going to create ansible playbooks for the tasks that are at hand. Let’s start simple and then create a little more complicated playbook with loops and conditional statements. I am a newbie to Ansible, so if any of the visitors have any suggestion or can improve on the playbook that I have please contribute in the comment section below, so that it can help others coming here to see how to achieve this task. I will create a page for this on my website and link it in the description as well. So, let’s get started.

First of all, why would we want to install the agent using ansible can't we just ask the OS admin to get this done and Yes, we have NetWorker tools like nsrpush to do an upgrade as well. Well with the adoption of DevOps in the different fields in IT, there is more and more expectations from the engineers to automate all the tasks that would rather be done manually. So, when your company wants to move into a model of automating the general tasks using automation tools like Ansible you can be ready with solutions. Let's get into what you are really here for – Installing, Upgrading and Uninstalling NetWorker using Ansible.

Please do keep in mind that this is not an ansible tutorial and there are many tutorials and ebooks out there that can help you understand how ansible works and how to structure an ansible playbook, I recommend you to refer to them if you want to understand Ansible more in depth. But I will take you through the structure of the playbook that I will be using and about each task that is used in the playbook. The tasks are called modules and are well documented in https://docs.ansible.com/ansible/latest/user_guide/windows_setup.html

Before going into the playbook let’s look at the inventory file. There is a default inventory file that is defined in Ansible config and is usually at the location /etc/ansible/hosts. We will be using a user defined inventory file where all the information that we need is present. An inventory describes the parameters that are required to reach the server you want to manage. Looking at the file that we have here , The first block defined by all vars defines the variables required for the connection. “linux_clients” defines which group these variables belong to, here all means it belongs to all the groups. “vars” means that this is a variable block. The next block is “clients” which defines a set of hosts that are grouped. So, in order to act on this set of hosts I can use the name “clients” in the playbook. Here we have defined a name for each of the host IP’s that we have so that it is easier for us to recognize the system that might have some issues completing a task, or you can provide the hostname in each line instead.

Alright, let's look at the first playbook which is a simple playbook for installing/upgrading NetWorker client agent on RHEL.Playbooks as written in YAML,

Let’s now look at the tasks one by one.

The name tag on each of these tasks is just a human readable message that will help us understand which tasks are currently running.

The first task in the list is to copy the installation file from the ansible core server to the hosts where the installation needs to be done. This task is using the “copy” module. You can refer to the documentation for this module to understand fields used within the task definition, these are the inputs to the modules.

The second task is to install the NetWorker client and this task is using the “yum” module, the state; present means that task is for installing the package. Absent would have meant we want yum to uninstall the mentioned package. We will look absent in the playbook where we will uninstall the NetWorker package. At the last line of the yum task we have a tag called notify which calls another task which is defined within the handlers on successful completion of the current task. In case the current task fails the handler task will not be notified to run.

If the “install the NetWorker client binaries” task fails then the playbook exits and no other task is run. But if it succeeds, “Start the NetWorker service” is the next. This uses the module “service” and you guessed it right it starts a service if not running or restarts the service if already running. And this task on success notifies the “Update servers file” task, which is using the “copy” module. This task copies the text defined in “content” into the destination files. If the file does not exist it will create the file and place the text inside the file. And these tasks will in turn notify the “Start the NetWorker service” task on successfully completing the copy task.

How to use the playbook?

Before running the playbook it would be a good practice to check if the ansible core server is able to connect to the respective servers with the comunication protocol declared in the inventory file. This can be achieve using the ansible command, its takes in the target machine group or machine name and the module that is to be executed on the mentioned machines. Below is the command use to check ping, ping unlike on OS does not use ICMP but instead checks for ssh(Or the connection protocol mentioned in the inventory files) connection to the target hosts.

The playbook that you have created can be used with the ansible-playbook command. The complete command to use the play book with a custom inventory file is as follows

Here is the output from the 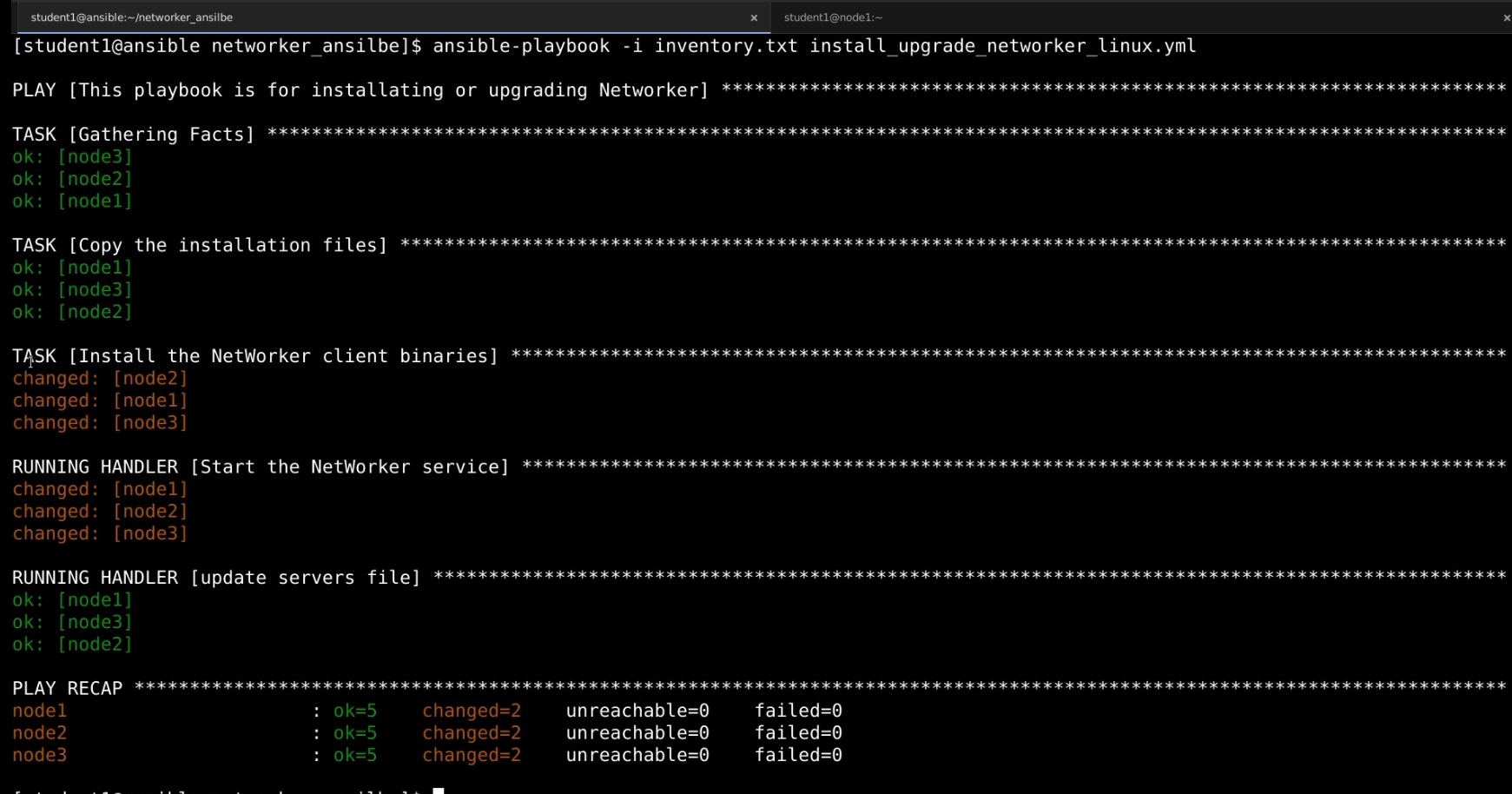 Alright, this was for Linux and as you see the entire process of writing the playbook and running it is pretty simple and not at all scary, don't you think. Now let's take a look at how to achieve the same result on a windows machine. Unfortunately things are not that straight forward with Windows.

For information on how to set set up the Windows host for Ansible refer https://docs.ansible.com/ansible/latest/user_guide/windows_setup.html

Let’s first look at the part of the inventory file that defines the variables and host definition to be used for windows. We have a ansible_connection variable set to winrm which tells ansible to user winrm to communicate with the host.
Now Let’s look at a playbook for installing agents on NetWorker. The structure is almost the same, other than that we are not going to use “become: yes” and the user that you are using in the inventory should have administrator privileges on the target system.

Like how we had in the earlier playbook first we will be copying the installation files over to the target server. Let’s take a look at what we have in the file set to copy over. We have a client installation files and the certificate file. I wanted to add a task for installing the certificate because of the issues upgrading to the latest version of Networker due to the missing certificate. The next task is to install the root certificate to the Trusted publishers on local machine. Then we install the networker client which on completing successfully notifies the task for updating the server’s files. This is optional of course. This task inturn notifies the task called win_service which is set to start the NetWorker services.

Using loops in the playbook.

Now let's look at a little more complicated playbook for upgrading and installing the NetWorker 18.2 client, the Extended client and man pages. Gotta have them all you know. These are listed as an array under the with_items and take a task run multiple times for each of the items in the array replacing it in the place of {{ item }}.

Here is the playbook that I have created for installating 3 packages, all under one task definition.

Last but not the least here is a playbook that can be used to uninstall a package from a Linux based system using the yum package. The state parameter is set to absent to instruct Ansible to uninstall the package mentioned in the name parameter.

Playbook - uninstall_networker.yml
Thank you for visting www.crazyrov.com, you can also check out my YouTube channel - crazyRov Studios for Data protection and cloud related technical videos.